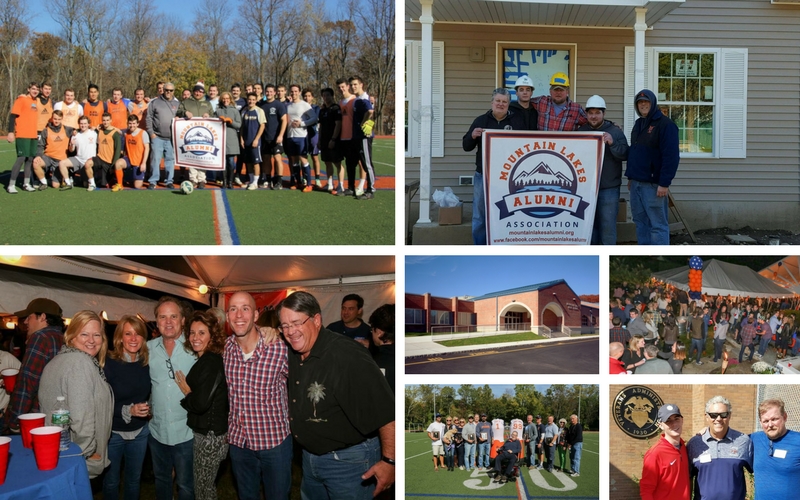 As we look back on 2017, the Mountain Lakes Alumni Association would like to thank all of its members, contributors, and followers for another successful year. Throughout the year, the MLAA has organized and hosted various social events, fundraisers, alumni games, and volunteer days in an effort to achieve our goal of maintaining a connection between our alumni with Mountain Lakes. With your support, we hope to build off of the momentum we’ve created and continue to work towards becoming a valuable resource to the entirety of the Mountain Lakes community.

The Mountain Lakes Alumni Association has dedicated four separate days to volunteer work at several well-regarded charities around the Morris County area. MLAA board members volunteered their time and hard work to the Morris Habitat for Humanity, served breakfast to veterans at the Lyons VA Hospital, and donated over 500 pounds of both turkey and ham to the Morris Interfaith Food Pantry over the holiday season. In addition, we made monetary donations to the American Red Cross to help provide Hurricanes Harvey, Irma, and Maria relief, as well as a separate donation to the Las Vegas Victims Fund following the tragedy that took place there in October.

In recent months, we have either introduced or solidified some initiatives that have garnered quite a bit of positive feedback. the first of which is care packages that are sent to college freshmen as they are adjusting to their new environments. MLAA teamed up with the newly established MLHS Entrepreneurs Club to gather the addresses, and contents of the packages. Next, we have helped organize alumni games for the MLHS football, soccer, and basketball teams. The turnout was very strong, and we hope to grow the attendance in coming years.  Finally, we have been posting Laker in the Spotlight pieces through our social media outlets that have received nostalgic responses from alumni across the country. If you have not had a chance to check them out, please make sure to do so on our Facebook page. Feel free to suggest any future Laker in the Spotlight pieces as we are always looking to promote what Lakers are doing out in the world today. Email dfusco@mlschools.org with any suggestions for 2018.

This year, we took Homecoming Weekend to a whole new level. Historically, our largest and most popular event has been the MLAA Pig Roast, and this year was no different. We hosted six MLHS class reunions and raised over $12,000. Prior to the party, we hosted yoga on the beach, as well as an Alumni Day where an alumni football game was played and MVP tackling dummies were dedicated to the Lane and Christenson families on behalf of the HERD Alumni Association. From the events of the alumni weekend, MLAA was also able to donate money to the MLHS Drama Club and the upcoming 2018 MLHS Project Graduation.

Please be sure to mark your calendars for October 6th, 2018, which will be the date of next year’s MLAA Pig Roast. We are already beginning to organize the party, so if you have a reunion coming up and do not hear from us shortly, please be sure to reach out. We will be able to accommodate as many guests as needed.

Additionally, there will be an MLHS Hall of Fame induction ceremony on Friday, October 5th, 2018 as part of this year’s Homecoming Weekend. If you would like to nominate an MLHS graduate for Hall of Fame consideration, please reach out to mlaa@mountainlakesalumni.org or dfusco@mlschools.org. Please be sure to keep an eye out for official Hall of Fame nomination forms later this year.

If you do not already follow our Facebook Page or our LinkedIn networking group, please join us as we will be constantly updating them with upcoming events, newsletters, and town news.

We look forward to capitalizing on the momentum 2017 brought us in the upcoming year!