Laker in the Spotlight: Chris Jenny 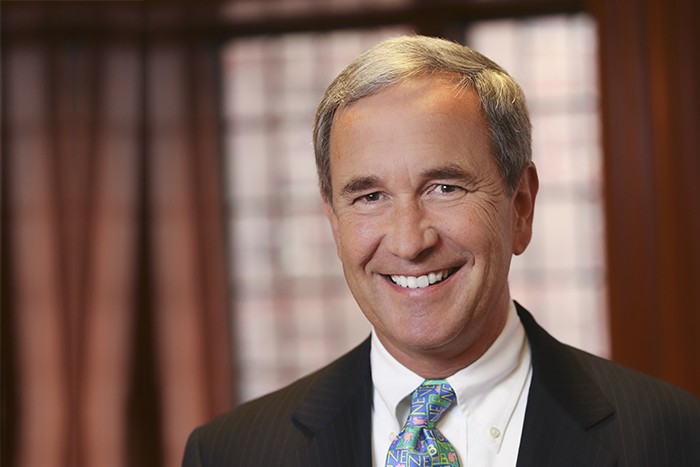 In Mountain Lakes, it seems as though there is never a shortage of impressive alumni. Turn on the television, and you may see Adam Zucker (MLHS ‘94) announcing college football. Open up the newspaper, and odds are there is Jo Becker (MLHS ‘85) authoring an investigative report for The New York Times. Applying to college? Well, talk to Richard Freeland (MLHS ‘59), the former President of Northeastern University. Although Mountain Lakes may be a town small in size, its residents never fail to think big. Of all the remarkable resumes to graduate from the high school, there is one man who may rank at the very top of the list. His name is Christopher Jenny.

As a young man with the world as his oyster, Jenny accepted a job offer from Bain & Co., one of the world’s leading management consulting firms. While there, he demonstrated his consulting prowess; being named the youngest partner in the company’s history. Subsequently, he served as CEO of portfolio companies for Bain Capital and The Noel Group, eventually becoming senior partner and president of The Parthenon Group. However, it was next that he accomplished perhaps his most incredible feats. Mr. Jenny was selected to serve on the President’s Export Council, comprised of the nation’s top advisors on international trade, by President George W. Bush. Additionally, he was also named as one of the “Top 25 Most Influential Consultants” by Consulting Magazine in 2001, along with Mitt Romney.

Ultimately, despite having an eye-opening career resume, Jenny’s accomplishments as a family man and community member are indeed his best. After meeting his wife Andi while at Bain & Co., they married and raised four kids. They have lived in their hometown of Wayland, Massachusetts for over 20 years, coaching youth sports and participating in numerous town committees.

Even though Chris may have left Mountain Lakes, it still holds a special place in his heart. He was inducted into the Mountain Lakes High School Hall of Fame in 2014 and he serves as a Mountain Lakes Alumni Board Member. Currently, Chris is the Chairman of Jennus Innovation which is a incubator/accelerator that helps launch high potential new ventures. One of the recent ventures for Jennus Innovation is a company called MVP (Mobile Virtual Player), which is developing new, state-of-the-art self-righting mobile training devices for high school, college and NFL football teams. Chris describes how Jennus connected with MVP: “A couple of years ago, Dartmouth Football Head Coach Buddy Teevens called me to ask whether Jennus Innovation could help bring his idea to reality. He had been working with the Thayer School of Engineering at Dartmouth on this concept of a mobile tackling dummy, had developed a prototype, and now wanted to make it into a real product that would change the game of football. Coach Teevens has become a leading voice in the USA for safety in football, CTE prevention, banning player-to-player tackling in practice, etc. I also had a longstanding relationship to Coach Teevens dating back to our undergraduate days on campus together, and my son was his starting quarterback at Dartmouth for several seasons.”

Chris and Jennus Innovation worked with MVP intensely for about 5 months, developing a business strategy, financial forecasts, hiring a management team, helping MVP raise money and ultimately negotiating a partnership with Rogers Athletic Company to manufacture and distribute MVP in the football market.

It has been an incredibly rapid start, with already more than half of all NFL teams using the MVP, leading college programs like Notre Dame and now cutting edge high school programs. The MVP has been featured on the Colbert Show, the Tonight Show, on ESPN,
during NFL games and even during the most recent Super Bowl. Chris continues to have a long-term involvement with MVP as he is on the company’s board of directors and is an investor in the business as well.

This past fall, the HERD Alumni Association and MLHS Alumnus Jamie Rodgers donated two of the MVPs to the Mountain Lakes Football Program. The HERD Alumni Association hosted the first annual HERD Alumni game as a part of Mountain Lakes Alumni Weekend in October 2017, and held an MVP ceremony on Wilkins Field. The two MVPs were donated to the HERD in the name of the Christenson and Lane families. Each family had three outstanding players who embodied the principles that the HERD was built on.

The MVPs have become a staple at HERD practices and are being used to teach safe tackling, blocking and football training. Once again, Chris Jenny has his fingerprints on making a difference in the world. The MVPs will be a big part of making a difference for the HERD Football Program and the Mountain Lakes community for many years to come.