Laker in the Spotlight: Joe Adams 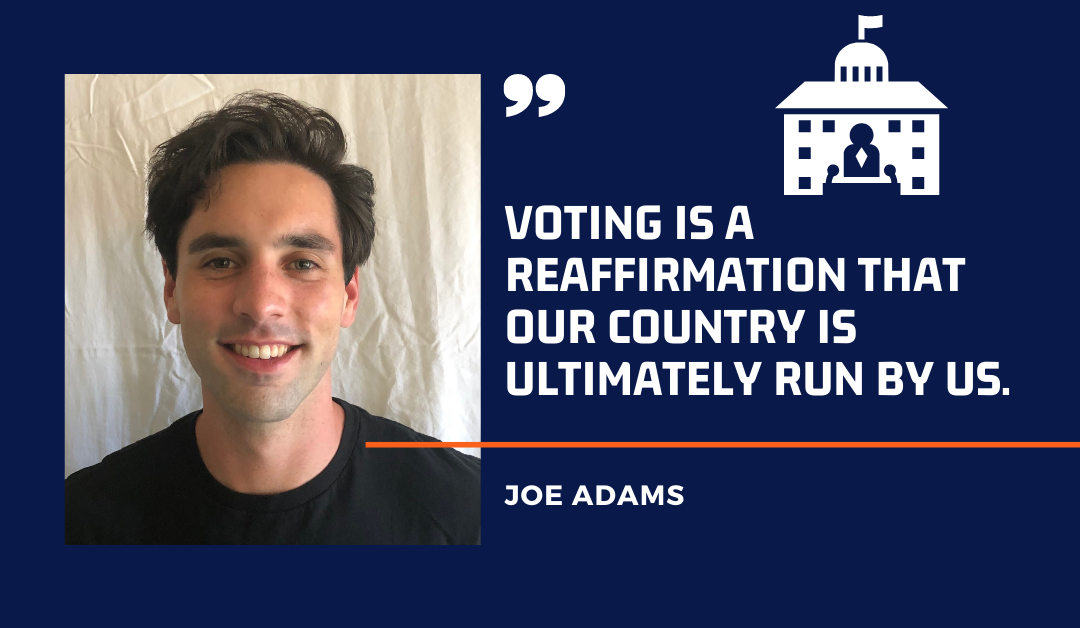 Joe Adams is a longtime Mountain Laker who graduated from MLHS in 2015. He grew up and has lived in town his whole life, and is the second of three siblings. Joe has been involved in numerous Mountain Lakes activities over the years. Being a three-sport athlete, musician, and an exceptional student demonstrates his commitment to working hard on whatever he gets involved with.

Joe most recently worked for the Biden presidential campaign, having previously worked on the Mikie Sherrell congressional campaign and on one for Mountain Lakes Council. He has certainly had a great start in politics, something he hopes to make a career out of after completing law school, of which he is a current student.

Joe recently talked about his experiences working on these campaigns with Mrs. Gillespie, the Mountain Lakes AP Government teacher. It is truly great to see a Laker giving back to his community. He is on the road to a bright future and we wish him the best of luck.

JA: I was born and raised in Mountain Lakes. A true K-12er.

JA: I loved growing up in town. Some of my best friendships come from people I have known before I even went to preschool. After moving out for the first time, I realized how rare it was to have bonds like that. Growing up I wanted to break out of that “Mountain Lakes bubble” but looking back, I am incredibly fortunate for the close friendships and opportunities it afforded me.

JA: I ran cross country, swam and played lacrosse. I was also involved in the American Politics club.

MLAA: How had college prepared you for working on political campaigns such as Joe Biden’s?

JA: The skills outside of the classroom definitely benefitted me the most. In college I was forced to put myself out there for the first time in my life really. Learning the simple skill of connecting with new people helps a lot on a political campaign since your main job is to build coalitions.

MLAA: What inspired you to want to get into politics and work on campaigns?

JA: I would be remiss if I didn’t give credit to my AP Gov teacher Mrs. Gillespie and my US History teacher Mr. Ziccardi. Both of them really kickstarted my interest in politics. Beyond that, it was a lot of introspection on how I had been placed in a very comfortable position in life by matter of pure luck. I felt it was important for my work to help get our country to a place where the “American Dream” is much more accessible to people who don’t have the same luck as those who grew up in a town such as Mountain Lakes.

MLAA: How many campaigns have you worked for and what was your favorite?

JA: I have done work for four campaigns ranging from Mountain Lakes Council to the Presidential Primary. I think my favorite was Mikie Sherrill’s congressional campaign. It was my first real immersion into the broader world of politics which was incredibly exciting. There were so many young, smart, ambitious people I met, and the nature of her candidacy was historic. She was the first woman ever elected in NJ-11 and her team was headed by millennial women! It was just so cool.

MLAA: What was the most difficult part of the job? How did you overcome it?

JA: The hours of a campaign can be pretty grueling. For the Biden campaign, you worked 12 hours a day, 7 days a week. You ultimately get used to it though and you have your coworkers to lift you up whenever the hours get to you. That camaraderie and shared mission help get you through it the most.

MLAA: What was a typical day like on a campaign?

JA: I was involved in field operations, so it all had to do with talking to voters. No two days were ever the same. One day may be canvassing, meeting with a Democratic county chair, and then hosting a volunteer phone bank at night. But the next day could be setting up a town hall, running the town hall, and introducing the candidate to voters at the event.

MLAA: Did you get along with the people you worked with or was there a lot of competition between each other?

JA: I never sensed any competition among my coworkers. The people you meet on campaign are always ambitious but not in a way that they will step on others toes to get ahead. I got along great with my coworkers and we were always so supportive of one another.

MLAA: Why is voting and being a part of politics important to you?

JA: Voting is a reaffirmation that our country is ultimately run by us. We get to choose what our society looks like by picking people who best represent our vision of that society. In that sense, everything can be traced back to votes. The people who make those decisions that touch our communities got there in a singular way; through our votes.

JA: Generally, I would say be open to knowledge, actively listen to others, and never assume you are done learning; intellectually or morally.

JA: I have always been really into music. I played drums and guitar in a few bands growing up but recently I have just been catching up on a lot of Grateful Dead live albums.

MLAA: Going forward what is next for Joe Adams?

JA: I am currently in law school and when that is over, I hope to work in voting rights.

JA: Robert F. Kennedy because he is my political idol, Lou Reed purely because he is too cool for words, and Hunter S. Thompson because you need a weird person for a good dinner party.